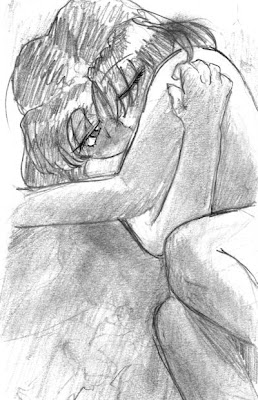 Wow. My behavior surprises me. Attention makes me want to draw more - I've even been keeping to a daily schedule, despite the fact I explicitly deny having adopted one. Today, I've been nervously checking if someone's posted comments - as people have been pleasantly active in the forums - considering latest updates. I guess the newness of practically regular updates -even if it's in a blog, is wearing off. Oh, well.

Notice! I have some family over during the weekend, so I can't really guarantee updates after today - not 'til monday, anyway. Let's hope I can get back to it after such a long break, eh?

In any case, today's Old Stuff is... spotlighting, I guess, the second-to-last page of Prologue --- the new page is the nineteenth page - twentieth, counting cover - of chapter ONE, after all.

In any case, crafting chapter zero was quite an interesting experience, and there are some nice arts there - I haven't improved that much since then. Maybe I draw faces a bit less wonky, though. Also, the hair here is still an intermediary one. Still, Terra's hair hasn't gone through as much changes as the galactic destroyer.

This one eventually became page nine of the prologue. A lot changed, only the bottom one stayed basically the same. I'm not sure how the dialogue was supposed to go, I guess I could ask Ben if he's kept some of the early drafts of the script - I've changed my Email address a couple of times since then, so I've lost most of them.

I often get into the mood of showing all this preliminary stuff, and some of it might make a nice Extra, but I've never really gotten into it. Blogger does make it easy, even if I'm using Good Evil Google servers to store the stuff. Hmm. Somewhat troublesome. Scary, even. 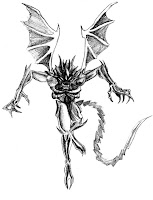 You know, I think I like this explaining-thing, so I shall proceed further with it. The critter on your right is the very first "solid" sketch of GD I made. Very skinny, stealing a lot from H.R. Giger's Alien work, and has weird bat-like wings.

Back when I drew this during a warm summer evening, June of 2002, almost ten months before the launch of the website in it's initial nettg.simud.org location, I already knew I was going to do some CGI-fu on the wings. The head had a lot less going towards the five petals style, but it's beginning. Also, four fingers and a generally slim build.

Some time between this image and the start of actual comic-arts, the GD lost a finger and... ate an Oozaru, or something. I do so like the fingers in this image, though. Nice posing.

The wings developed, from initial cloak of darkness in the cover - and, I believe in Ben's original description of the Beast.

Actually, let me quote Ben here, for a bit:

From the shattered front of the vessel flew a dark shape. It swooped toward the Senshi with a loud, enraged screech.

They ducked a snatch of its talons. It flew down and landed in front of them, lashing out with its huge jaws, roaring menacingly.

...Not really that much to go on with. I wonder, where the whole cloak of darkness thing came from, then? Ah, well.

In any case, as can be seen here, the wings start to charge up with dark energy and go from small, bat-like stubs to petals of darkness with... I believe, I was thinking of supernovas captured within. Also, that's where the petal-face comes from. So, the bat-like state is more like... an antenna of some sort? Perhaps.

I was channeling Dark Star from Slayers Try a bit - after all, there we have an actual galactic destroyer. I think this can be best seen in the very first GD-picture - the "Beware, Beware!" one. I like the green glowy-thing and the red eyes there, definitely.

In any case, the wings develop into... essentially a variation of the petal shape - I like sticking to certain visual themes and such. Although, I take no responsibility of how Terra's hair become GD-spike-like. It's due to Ben's influence, completely.

Of course, I really like the energy-blade wings, with Todd McFarlane type scraps of darkness around them, too. I did warn in an early post - possibly before Ammon gave us the current news-post system - that I wouldn't guarantee any sort of consistency between my drawings.

In any case, the fact we completed the prologue before starting the web site - and that was a good decision - we had some content even with a sucky update schedule - also allowed us to do... some revisions. Biggest of them being page six.
Here, let me introduce you to the original: 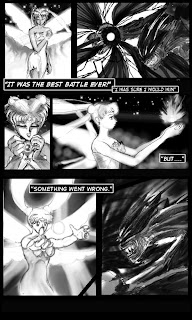 There isn't a single frame here with decent art in it - even the best ones, numbers three and four, are kind of... sucky. in three, everything is the wrong length, and four... well, the idea isn't so bad, but the angle --- thumb covering QS:s face? C'mon!

I'm telling you, during some of these shots, it's way too obvious when we're using our trusty crossdressing stuntman, Murray.
( By the way, I love the last picture of Terra going nuts on that extra. )

In any case, the actual page that went live, is quite good. Even if some parts of the original artwork suffered weird aliasing effects and whatnot in the transition, the top frame, as well as frames 5-9 are all quite nice. What I don't like anymore is how the puny lightnings interact with the dialogue and the neck-bending GD in frame 3.

I think I was planning to have the GD do a second, more powerful attack there, but, er, that scene got cut in the scripting phase, or something.

Also, the lower torso of GD in the last frame was very sucky, thus the SFX cover-up.
Oh, just because!!: 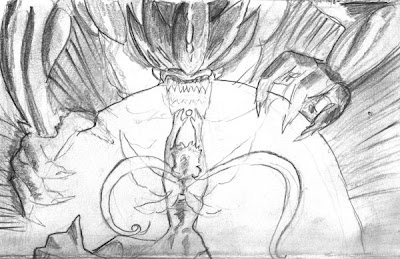 I have a habit of lining up stuff naturally, or somesuch, which gives an illusion of... something or other. I'm not really sure, but someone mentioned it. Flow, dynamics. Something like that. In any case, this has all sorts of niceness going, so... y'know, just because.

I will probably talk more of the comic later... But I shan't forget drawing, either! In worst case, I hope this will tide you over the weekend.
Posted by Esa Karjalainen at 9:40 PM